Stockholm is the fastest growing capital in Europe. The most difficult challenges of the growth are infrastructure and housing. Along with globalization and digitizing, urbanization is without doubt the most distinct force behind the changes of world economy.

The Stockholm Chamber of Commerce aims at contributing to the discussion about the longterm development of the capital region. During the coming years they will present a series of reports on how Stockholm could grow to one size bigger. 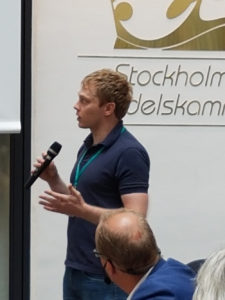 On the 7th of September a seminar was arranged in order to present the second report in the row. Grow Stockholm through Urban Linear Ferries suggests 15 new boat commuting lines in the region.

At the seminar urban planner Michael Tanko, researcher at KTH Royal Institute of Technology, gave an international view of the development of urban public transport for example from his hometown Brisbane, but also from other international cities.

Michael Tanko is the new postdoc on waterborne urban mobility within the research platform Waterway 365, driven by KTH and Vattenbussen AB since 2014.

The Swedish research and innovation project Waterway 365 was started by KTH and Vattenbussen in cooperation. For more information contact us at info@waterway365.com.